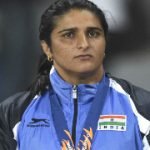 Discus thrower Seema Punia has qualified for the 2016 Rio Olympics scheduled to be held in Rio de Janeiro, Brazil in August 2016. She is the 19th Indian track and field athlete to qualify for Rio Olympics.
Seema was able to qualify after throwing discus at 62.62 meters at the Pat Young’s Throwers Classic 2016 event held at Salinas (California) in the United States. She crossed the Rio Games qualification standard of 61meters with her season’s best effort of 62.62 meters and winning gold medal in the event.
This will be Seema’s third Olympic Games appearance having taken part in 2004 and 2012 where she failed to get past the qualification round on both the occasions.