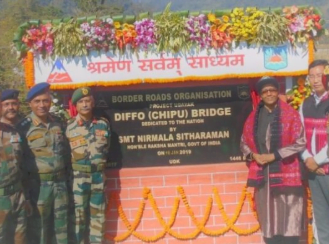 The Union Defence Minister Nirmala Sitharaman inaugurated the 426.60 m long Pre Stressed Concrete Box Girder type Diffo bridge over Diffo river on Roing – Koronu- Paya road in Arunachal Pradesh.
The Diffo bridge will provide for uninterrupted access between Dibang Valley and Lohit valley region of Eastern Arunachal Pradesh together with providing an all-weather road to our troops deployed on the China border.
The construction of the Bridge was undertaken by the Project Udayak of the Border Roads Organisation.

Project Udayank of the Border Roads Organisation was raised on June 1990 at Doomdooma Assam. The name of the project Udayank is synonymous to the land of rising sun which fits appropriately to the area it operates. It consists of two border road taskforces undertaking construction activities in the northeastern region.

During Wartime, BRO is responsible for

The Border Roads Organisation works under the Ministry of Defence.