Events, Happenings and Observances:
Britain : Nuclear New Build Conference
British Business, Innovation and Skills Minister Pat McFadden was in India recently. He states that Civil Nuclear Cooperation declaration signed by India and the UK would help both the countries achieve low carbon growth. He also states that ” UK will host a major Nuclear New Build Conference, focusing on new opportunities in India and the UAE. It has invited senior representatives from the Nuclear Power Corporation of India Ltd (NPCIL) to set out India’ s plans for developing nuclear power projects and technologies in the coming years. This event will be attended by nuclear leaders from 15 nations and will provide a platform for British Industry to forge new links and demonstrate their competitive edge.”

National Updates:
Gadkari on Article 370:
BJP president Nitin Gadkari says that Article 370 which gives special status to Jammu and Kashmir, should be scrapped so that the region is open to all Indians.

More About Article 370:
Article-370 was created with a view that its existence would be temporary. The Ruler of Jammu and Kashmir signed the instrument of accession whereby only three subjects were surrendered i.e. External affairs, Defense and Communications, by the State to the Dominion of India. Thus the relationship between the State of J&K and the Union of India is exceptional. The State enjoys a greater measure of autonomy and the power of the Union of India is restricted, as regards other States. The Union of India is incompetent to declare financial emergency and emergency in case of failing of constitutional machinery with respect to the State of J&K.; Only emergency due to War or External Aggression can be declared as it is within the scope of “Defense” as surrendered to the Union of India. The Union Legislature can not legislate on the matters provided in the Union list and Concurrent list which are not in accordance with the subjects provided in the instrument of accession. The consultation of the State Government is required in any matter that affects the State. It can be said that the Union of India has the power to act on an issue independently only if it is somehow related to the three subjects surrendered or those expressly mentioned in the instrument of accession

Himachal Pradesh : Inspiration from Costa Rica
Costa Rica government had announced in 2007 , that the country plans to become the first carbon neutral country by 2021. This country is fast emerging carbon neutral State in the near future by checking all possible greenhouse gas emission.

”We are inspired from the achievements of Costa Rica and destined to emerge as the first carbon neutral state by 2021. The achievement by the small Central American country in successfully doubling its green cover from 21 per cent in 1988 to 42 per cent in the year 1997, was a remarkable and inspiring achievement for rest of the world to learn from,’

Himachal Pradesh plans to seek cooperation with Costa Rica in implementation of all environment protection measures in the State keeping in view the geo-physical conditions prevalent here.

Orissa: First Community Station
Orissa’s first community radio station ” Radio Namaskar” which has been established by Young India, an NGO has gone on air in Konark

New Delhi : Mughal Garden Opens to Public
The Mughal gardens are open to the public in February-March every year. Visitors are allowed entry to the garden from 9.30 A.M. till 2.30 P.M. on all days except Mondays. The Gardens are covering an area of 15 acres and this year’s special attractions are Cactus Corner and a Bonsai Segment.

Note: Until 1950 Rastrapati Bhavan was known as “Viceroy’s House” and served as the residence of the Viceroy of India. It is the largest residence of any Head of the State in the world.

Apple’s answer to Kindle- iPad
On 27 January Apple Inc. announced the iPad – tablet computer which has similar in functionality to the iPhone and iPod touch. Since It is Apple’s first device to use its iBookstore service and companion iBooks ebook reading application, the iPad has been compared to Amazon’s Kindle,

2010 Hockey World Cup – Trophy unveiled:
12th Men’s Hockey World Cup is FIH Hero Honda World Cup being organised in India from Feb 28 to March 13, 2010 at New Delhi’s Dhyan Chand National Stadium.The trophy is unveiled in Ludhiana where after being displayed will be taken to other parts of the nation. Hockey World Cup trophy has been designed by Bashir Moojid of Pakistani army. 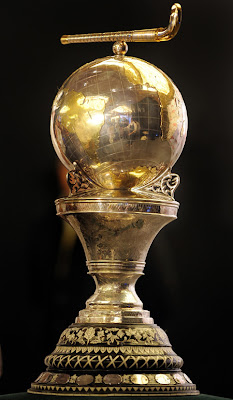