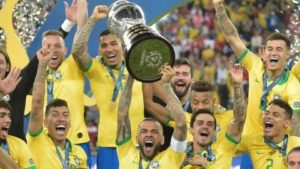 Brazil have defeated Peru with 3-1 to win this year’s Copa America football trophy. This is Brazil’s 9th Copa America title after a gap of 12 years since 2007.

Gabriel Jesus and Richarlison scored a goal each for Brazil.

Brazil has won the title every time they hosted the tournament and this is its 5th title at home. The last time they won Copa América at home was in 1989 against Uruguay.

Since 2007 Brazil’s only other title came in 2013 Confederations Cup which was also at home.

Brazil had not made it past Copa América’s quarterfinals since beating Argentina with 3-0 in 2007 final in Venezuela. In 2016 Brazil did not even get past group stage.

This is also Brazil’s 1st tournament success since winning a gold medal at 2016 Olympics.

Player of the Final: Everton. He also finished as one of tournament’s top scorers with three goals.

Uruguay are Copa América’s most successful nation with 15 titles (one more than Argentina).

It is an international men’s association football championship.

It is organized by South America’s football ruling body CONMEBOL.