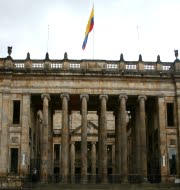 Colombia’s Congress passed a law granting amnesty to Marxist FARC (Revolutionary Armed Forces of Colombia) rebels as part of historic peace deal reached between rebels and Government.
The Senate passed the bill 69-0 votes after the House of Representatives approved it by 121-0 votes. This is another step to formally end to 52 years of Columbian civil war (Latin America’s longest conflict).
The law grants special legal treatment, amnesty and pardons to members of the FARC accused of political and related crimes. It does not apply to FARC rebels accused of offenses such as war crimes, rape, torture and extrajudicial killings.

The amnesty bill was part of a renegotiated peace pact signed between Government and rebels on November 24, 2016 to end the conflict after nearly four years of negotiations. They had renegotiated the peace deal after voters rejected an earlier peace deal (signed in September 2016) by a narrow margin in the referendum held in October 2016. The Colombian Government had decided to ratify the amnesty bill in Congress rather than risk a second referendum.

Colombia civil war is one of the longest civil wars in modern times and was the sole remaining armed conflict in the South (Latin) America. The five decade long civil war has killed more than 2,60,000 people and internally displaced close to seven million people. It was started in the 1960s as a rural uprising for land rights by FARC as communist-inspired guerrilla movement inspired by Cuban Revolution. The main aim of FARC was to reduce the gulf dividing rich and poor and land reform for equality in the Andean country. Over the decades, the conflict has drawn in various leftist rebel groups, drug gangs and right-wing paramilitaries. However in recent times, the FARC had shifted from their original ideology and were active in illegal drug trade, kidnapping and extortion activities.