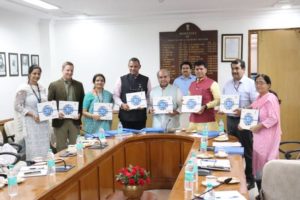 ‘The Coffee Table Book – 50 years of Partnership for Change’ was launched by Union Minister of Agriculture and Farmers’ Welfare, Shri Narendra Singh Tomar along with Dr. Hameed Nuru, Representative and Country Director, United Nation World Food Programme (UNWFP) in India, to commemorate five decades (50 years) of partnership between Union Ministry and agency towards addressing food and nutritional security in India.

It showcases key milestones achieved by Government of India (GoI) in its efforts to make the country free from hunger and malnutrition and role played by WFP in this endeavour.

The book includes some of the major turning points in India’s journey towards food and nutrition security captured in Green Revolution, White revolution (also known as operation flood), digitization of food safety nets, improvements in livestock and dairy development.

It was founded in 1961. It was formally established by Food and Agriculture Organization (FAO) and United Nations General Assembly (UNGA) in 1963. It is headquartered in Rome, Italy.

It is food-assistance branch of United Nations. It is also the world’s largest humanitarian organization that addresses hunger and promotes food security.

It is member of United Nations Development Group (UNDG) and part of its executive committee.

As per WFP, it provides food assistance to an average of 91.4 million people in 83 countries each year.