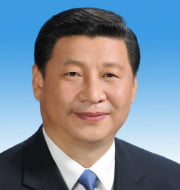 In the above 4 comprehensives, the first three are familiar to slogans of previous Chinese leaders, but the fourth comprehensive is a specific reference to the current anti-corruption campaign being prosecuted by Xi Jinping.
Previously also, similar slogans were put forward by his predecessors, including Hu Jintao’s Three Supremes and Jiang Zemin’s Three Represents.
Since 1950s several communist leaders had given number of similar kind of slogans. The Cultural Revolution begun by Mao Zedong also included phrases such as smash the four olds.