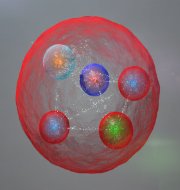 Scientists at CERN’s Large Hadron Collider (LHC) have discovered a new class of exotic subatomic particles called the Pentaquarks.
The discovery was made by the scientist’s after watching the decaying of a subatomic type particle known as the Lambda B baryon.

Note: In 1964, US physicist Murray Gell-Mann had revolutionised the understanding of the structure of matter. He had proposed that a category of particles known as baryons, which includes protons and neutrons and three fractionally charged objects called quarks. For this work Gell-Mann was awarded Nobel Prize in physics in 1969.