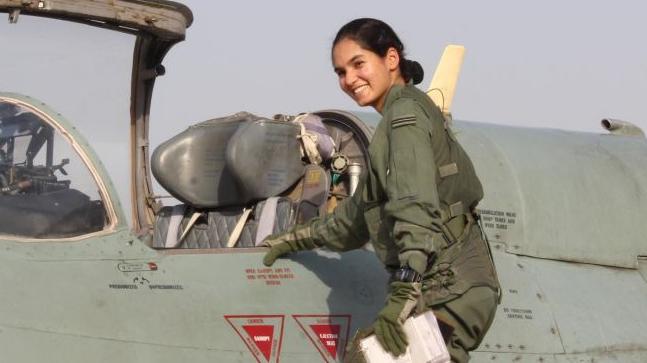 She is from Rewa district, Madhya Pradesh and was born on 27 October 1993. She is posted to No. 23 Squadron (Panthers) based in Suratgarh in Rajasthan. She is from first batch of three women officers who were commissioned as fighter pilots in IAF. She has completed her training at Hyderabad Air Force Academy.
Prior to solo flight, she had undertaken flights in twin-seater training jets, accompanied by Qualified Flying Instructors of IAF. After completing her basic flying training on Pilatus aircraft at Air Force Academy, she had undertaken six months of training on Kiran trainer jets at Hakimpet, followed by year-long training stint on Hawk advanced trainer jets at Bidar Air Base.

This is a major milestone in training of a fighter pilot and first time Indian woman has flown a fighter aircraft solo. It demonstrates IAF’s enduring commitment to ‘Nari Shakti’. Three women officers Avani Chaturvedi, Bhawna Kanth and Mohana Sing were selected to be fighter pilots in June 2016 when IAF had agreed to induct women as fighter pilots on “an experimental basis” for an initial period of five years. Before 2016, women made up just 2.5% of India’s armed forces, working in mainly non-combat roles. Pakistan has about 20 female fighter pilots since Pakistan Air Force (PAF) began inducting women into combat roles in 2006.