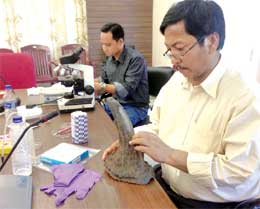 The Assam Government has launched Rhino horn verification process for verifying rhino horns stored in various treasuries of Assam since 1980.
The process will be responsible for verifying the genuineness of the rhino horns, which were recovered since 1980s and stored in various treasuries.
The process of verification will be conducted by 12-member Rhino Horn Verification Committee which was recently instituted by state government.
Key Facts