Asia’s Largest Tulip Garden in Srinagar to Open for Public 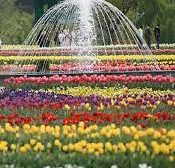 Asia’s largest Tulip Garden in Srinagar, Jammu & Kashmir, is scheduled to be opened for general public and tourists from March 25, 2021.

Tulip Garden is a spectrum of colours which features lakhs of tulips. Flowers have blossomed in the lap of Zabarwan Hills along the banks of Dal Lake in Srinagar city. Around 15 lakh flowers of more than 64 varieties are in full bloom nowadays in the garden.

The garden was previously known as Model Floriculture Center. It is the largest tulip garden in Asia spread over an area of 74 acres. It is situated on the foothills of Zabarwan Range in Dal Lake of Srinagar. Tulip garden was inaugurated in 2007 with the aim of boosting floriculture and tourism in Kashmir Valley. It is built on a sloping ground in terraced fashion comprising of seven terraces. Many other species of flowers like daffodils, hyacinths, and ranunculus have also been added to the garden.

It is an annual celebration that showcase the range of flowers in tulip garden as a part of tourism efforts by the state Government. Festival is organized on the onset of spring season in Kashmir valley.

Tulips are a genus of spring-blooming perennial herbaceous bulbiferous geophytes. Tulips are generally large, showy and brightly coloured. They have a different coloured blotch at the base of their tepals internally. The flower is a member of lily family called Liliaceae.