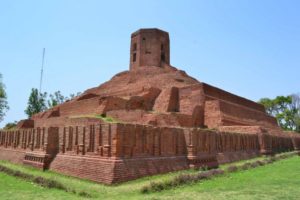 According to a notification issued by Union Ministry of Culture, Chaukhandi Stupa, an ancient Buddhist site located in Sarnath, Uttar Pradesh (UP) has been declared as ‘protected area of national importance’ by Archaeological Survey of India (ASI).

For declaring the stupa as protected area government sought public feedback on 8 March 2019 for a period of two months.