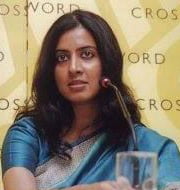 Poetess Arundhathi Subramaniam has won the inaugural Khushwant Singh Memorial Prize for Poetry.
She has been conferred this prize for her work When God is a Traveller. Her name was announced at a prize ceremony held at Jaipur Literature Festival.
The jury, which included Ashok Vajpeyi, Jeet Thayil, Namita Gokhale, Pavan K. Varma and Soli Sorabjee had chosen her work When God is a Traveller from among the nominated books of poetry by a single author published between September 15, 2013 and 2014.

It was established in 2014 by Suhel Seth in memory of the late Khushwant Singh.
It is conferred to Indian poets writing in English or Indian language translation. The award is carrying a cash prize of Rs. 2 lakh.

The National Academy of Letters have announced the names for the “Sahitya Akademi Award 2020 on Ma...

Oxford dictionaries has declared “Nari Shakti” as the Hindi word for the year 2018. The ...

The word Nari Shakti is chosen as the word of the Year 2018 by the Oxford dictionaries. The announce...

Eminent Rajasthani litterateur Dr Satya Narayan was chosen for the 26th Bihari Puraskar 2016 by the ...