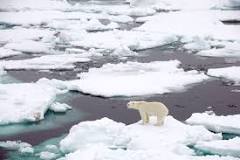 According to a study published in the journal Nature Climate Change, conducted by the University of California, Los Angeles (UCLA) in the U.S., Arctic Ocean may be ice-free for part of year starting sometimes between 2044 and 2067.  Satellite observations show that since 1979, the amount of sea ice in the Arctic in September has declined by 13% per decade.  Study says that, Sea ice is a key component of the earth system and is also critical to the Arctic ecosystem.