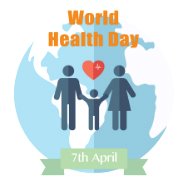 The World Health Day (WHD) is observed every year on 7 April to mark the anniversary of the founding of the World Health Organization (WHO).
Observance of the day focuses on disseminating knowledge and awareness about human health, increasing life expectancy by adding good health to the lives of people and promoting healthier living habits across the globe.
The day also provides with a unique opportunity to mobilize action around a specific health topic of concern to people all over the world.
2017 theme: “Depression: Let’s talk”. It seeks to encourage people to come forward for treatment. Under it, WHO will be leading a one-year global campaign on depression which is the leading cause of ill health and disability worldwide. The goal of the campaign is that people with depression get help.
More than 300 million people around the world are now living with depression, an increase of more than 18% between 2005 and 2015. It affects people of all ages, from all walks of life, in all countries. At worst, depression can lead to suicide, which is now the second leading cause of death among 15-29-year olds.