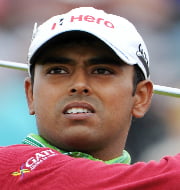 Ace Indian Golfer Anirban Lahiri has become the first Indian to qualify for the prestigious President’s Cup of Golf.
World No.40, Lahiri qualified to this prestigious cup through automatic qualifications as team member of the International Team.
The International team is set to take on United States team in the biennial Presidents Cup 2015 to be held at Incheon, South Korea.
In season 2015, he has won 2 European Tour, 7 Asian Tour including the Hero Indian Open in 2015 and Malaysian Open. So far, he has won 11 National titles in India including Ahmedabad Masters and Haryana Open. Union Government has bestowed Arjuna Award on him in 2014.
President’s Cup of Golf:  The biennial Cup is a series of men’s golf matches between a team representing United States (US) and an International Team representing the rest of the world excluding Europe. In case of European counterparts, the matches are played for the Ryder Cup which older than President’s Cup.