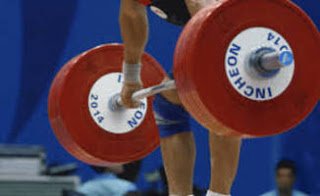 Weightlifting is an athletic discipline in the modern Olympic programme in which the athlete attempts a maximum-weight single lift of a barbell loaded with weight plates. The two competition lifts in order are the snatch and the clean and jerk.
Each weightlifter receives three attempts in each, and the combined total of the highest two successful lifts determines the overall result within a bodyweight category. Bodyweight categories are different for male and female competitors