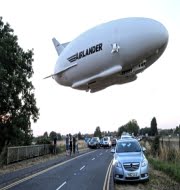 The world’s largest (longest) aircraft the Airlander 10 has embarked its maiden flight at an airfield in Cardington in central England. It is a hybrid airship made by Hybrid Air Vehicles in United Kingdom.
Its successful flight comes 85 years after another airship the ill-fated R101 took off in October 1930 from the same airfield before crashing in France.
Features of Airlander 10