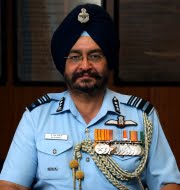 Air Chief Marshal Birender Singh Dhanoa took charge as the 22nd Chief of the Air Staff (CoAS) of the Indian Air Force (IAF). He succeeded Arup Raha who retires from the service.
He is the third person from Sikh community to head the IAF after Arjan Singh and Dilbag Singh. Prior to this appointment he was Vice-Chief of IAF.