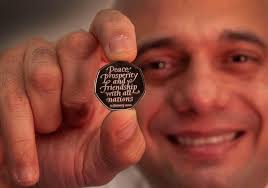 To mark the departure of the United Kingdom from the European Union, the UK’s Chancellor of the Exchequer, Sajid Javid has unveiled a new 50 pence coin with the inscription of “Peace, prosperity, and friendship with all nations” and the Brexit date of 31 January 2020. The coin is known as ‘Brexit Coin’ have been minted by the UK government-owned Royal Mint twice earlier in March and October month of 2019, which was pulled from going into circulation on both the occasions as the proposed dates of the Brexit on 31st March and 31st October 2019 were respectively missed.

The bill to implement the exit of the United Kingdom from the European Union officially became law recently this week. Nearly 10 million such coins are to be distributed and the first three million will be available from January 31, in all banks, post offices, and shops, while another 7 million is likely to be circulated later in the year.