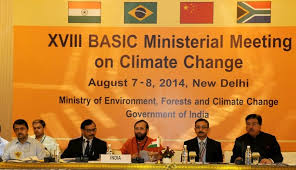 The 26th BASIC Ministerial Meeting of Environment Ministers was held in Durban, South Africa. The grouping is a bloc of four countries – Brazil, South Africa, India and China. It was attended by from BASIC countries and Michal Kurtyka of Poland, next president of Conference of Parties (COP-24) under United Nations Framework Convention on Climate Change (UNFCCC). India was represented by Union Environment Minister Harsh Vardhan.

BASIC countries decided to preserve integrity of historic 2015 Paris Agreement, including principles of common but differentiated responsibilities and equity. They held that world is at critical stage in combating climate change and response of developed nations to tackle the issue is still not adequate.
They reiterated that developed nations should take lead in terms of mitigation and providing means of implementation to developing countries. They should equally give importance to ambition of developing countries by providing them supported and sustained, predictable and adequate finance, technology and capacity-building support. Union Environment Minister Harsh Vardhan reiterated his appeal for joint efforts to create societal movement in combating climate change through Green Good Deeds.

BASIC countries are bloc (geopolitical alliance) of four large newly industrialized countries – Brazil, South Africa, India and China. It was formed by agreement in November 2009. They are committed to act jointly at Copenhagen climate summit, including possible united walk-out if their common minimum position was not met by the developed nations during climate talks. It is working to define common position on emission reductions and climate aid money and try to convince other countries to sign up to Copenhagen Accord.