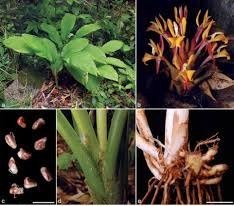 Botanical Survey of India (BSI) scientists have discovered two new species of ginger named Hedychium chingmeianum and Caulokaempferia dinabandhuensis in easternmost districts of northeast India. Both the plants belong to the family of Zingiberaceae, to which the commonly found ginger (Zingiber officinale) belongs.

Hedychium chingmeianum: It was discovered in Tuensang district in Nagaland, both bordering Myanmar. It is an epiphytic plant and grows on trunks of tall trees. It has reddish stems and creamy white flowers.
Caulokaempferia dinabandhuensis: It was found growing in rock crevices, boulders and humus rich soil in the Shirui Hills in Ukhrul in Manipur. It has beautiful oval-shaped pink flowers which appear in June-July. It has been named after Mr. Dinabandhu Sahoo.

Out of 44 taxa, 31 species and 13 varieties of genus Hedychium found in India, only 5 are reported in south India. The remaining species are all found in northeast. Most of the species under this genus have medicinal properties. However, it is yet to be ascertained whether the newly discovered species Hedychium chingmeianum has medicinal properties or not.