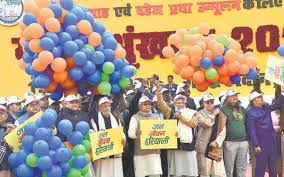 The state government of Bihar under its ‘Jal-Jeevan-Hariyali’ campaign, recently organized a record 18034 km long human chain, which witnessed the participation of more than 5 Crore people. Seven choppers and a little over 100 drones covered the event in which Human Chain was formed inside the school campuses by more than 57.76 lakh school children from classes I to IV, also about 43,445 prisoners formed human chain inside their respective jail premises between 11:30 am to 12 pm on Sunday, 19th January 2020.

The Bihar Chief Minister Nitish Kumar participated in the event along with the Deputy Chief Minister and his Cabinet members. The human chain was organized to create awareness among the public on climate change and social ills such as dowry and child marriage. The human-chain, which is claimed to be the longest in the world is the third of its kind event after the chains formed in Bihar in 2017 and 2018. To access the length of the Chain formed, representatives from the Limca Book of Records and Indian book of records were present.