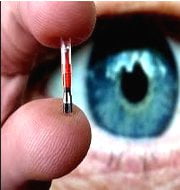 A 15-year-old boy named Byron Wake has become Britain’s youngest ‘cyborg’ i.e. part-human, part machine.
He achieved this feat after inserting xNT microchip under the skin using hypodermic syringe. The chip is the size of a grain of rice and is encased in bio-safe glass.
It has ability to emit a low-power radio signal that can perform simple functions such as unlocking a mobile or opening a door and operate some Bluetooth devices with a wave of his hand.
It should be noted that Kevin Warwick from UK was the world’s first cyborg when he had a chip implanted in his body in 1998. It is estimated that around 10,000 people worldwide have implanted the chip in their body.