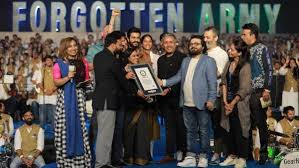 As many as 1046 singers and musicians from across the country performed together at a musical event on Friday, 24th January 2020 in which they performed three songs from the album of the Amazon Prime web series. The music album was composed by the famous Bollywood musician Pritam Chakraborty. The web series is based on the sacrifices and valor of the soldiers of Azad Hind Fauj (Indian National Army). Swapnil Dangaikar (adjudicator present at the event for Guinness World Record) stated that the performers performed with the highest level of proficiency to make the entire performance spectacular to watch and listen.