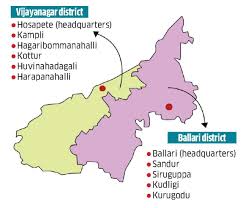 The Karnataka Government recently notified that, the Vijayanagara has become the 31st district of Karnataka officially.  The district has its headquarter at Hosapete.

The Karnataka Chief Minister BS Yediyurappa had announced his plan of creating a new Vijayanagara district in the month of September, 2019. The Chief Minister had cited it is required to create a new district for the administrative reasons. He was of the view that. Creation of the new district will help in promoting the tourism to the places like Hampi temple. He also said, the move will help in the development of six talukas that are part of the district. Thus, the Karnataka Cabinet formally approved the creation of a new vijayanagara district on November 18, 2020.

It is a UNESCO World Heritage Site which is located in east-central Karnataka. The site is a pilgrimage centre of the Hindu religion. The Hampi region used to be the capital of the Vijayanagara Empire in 14th century. Hampi-Vijayanagara was the second-largest medieval-era city of the world following Beijing.