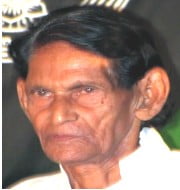 Veteran singer and music composer Bombay S. Kamal passed away on 17 March 2015 in Thiruvananthapuram, Kerala at the age of 85. He was suffering from respiratory ailments.
In past six decades, he had active presence in the field of music especially in Malayalam film music.