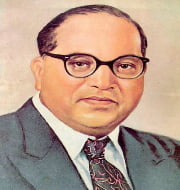 It should be noted of Dr. Babasaheb Ambekdar is chief architect of Indian constitution and was bestowed with Bharat Ratna, India’s highest civilian award in 1990.