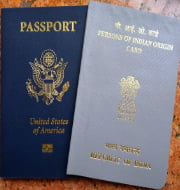 Union Government has merged Persons of Indian Origin (PIO) card-holders with Overseas Citizens of India (OCI) card-holders.
Union Home Ministry in this regard has issued notification mentioning that all PIO card-holders henceforth are deemed to be OCI card-holders with effect from 9th January 2015.
Thus, withdrawing PIO cards with immediate an effect. Now only OCI cards facility with enhanced benefits will exist to provide maximum possible benefits to Indian Diaspora.
This notification was announced on the concluding day of 13th Pravasi Bharatiya Diwas.
Background
Earlier on January 6, 2015 Government had promulgated Ordinance to amend the Citizenship Act, 1955.
This amendment changed the eligibility and provided additional benefits of PIO Card holders that have been incorporated in OCI Card and certain other relaxation to OCI Card holders.
Governments this decision comes in lines with Prime Minister Narendra Modi previously made announcement in USA and Australia visits.
During this visit he had announced that PIO and OCI cards will be merged and the Indian Diaspora will be given maximum possible benefits.