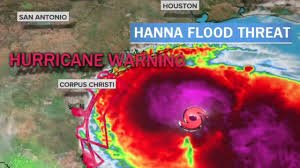 Downgraded to a tropical storm, Hanna came ashore on July 25 as a category 1 hurricane on the five-step Saffir-Simpson scale and later made a second landfall in Kenedy Country, Texas. Powerful winds affected trucks and a recreational vehicle and electricity.

At one point more than 2.80 lakhs houses and businesses continued without electricity but on July 26 the figure came down to 2.30 lakhs. However, it gradually weakened heading towards the west over land. Its centre was about 40 miles from McAllen, Texas on July 26 but later it shifted to about 65 miles from Monterrey, Mexico.

The maximum speed of this storm was 60 miles per hour and emergency disaster declaration was announced in Texas as well. It was expected to lose more steam while moving across Texas and northeastern Mexico and that is why the storm surge warning had been cancelled by the weather department.