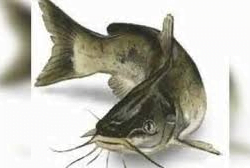 Thai Mangur is a catfish that was banned by the National Green Tribunal as it was harming the local ecosystem and the consumers’ health. It is favoured by the cultivators due to its ability to feed on anything and survive in hostile conditions. It also has high demand because it is cheaper when compared to other seafood. Recently, thousands of tons of this banned catfish were found to be illegally bred in over 125 artificial ponds in rural Thane, Maharashtra.

Why was Thai Mangur banned?

Why is Thai Mangur cultivated illegally?

In spite of several legal measures and bans, the species is being cultivated illegally and its sales are popular mainly for its surviving capabilities. The fish can grow even in muddy waters between the rains. Also, it grows three feet to five feet weighing three to four kilograms in just two to three months. It is a freshwater air breathing fish. It has the ability to wiggle on dry land to find food or suitable environment. It lives in stagnant or slow-moving waters. It has an omnivorous diet, ability to survive on land and ability to hide in vegetation. These characteristics make the cultivation of the fish easy, highly profitable and economical for farming.