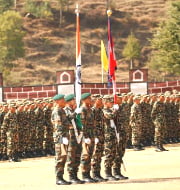 In this edition of exercise, Indian Army was represented by troops of Kumaon Scouts and Narayan Dal Battalion participated on behalf of Nepal Army. Both troops focused on the various counter insurgency operations. They also focused on important aspects such as humanitarian assistance and disaster relief (HADR) operations and environmental conservation. The exercise mutually benefited both armies by gaining varied experiences and also strengthened friendly relation between India and Nepal.

The Surya Kiran series of bilateral military exercises are conducted bi-annually, alternatively in India and Nepal. It is largest exercise in terms of troop’s participation in series of military training exercises undertaken by India with various countries. It aims at promoting military relations and increasing interoperability armies of neighbouring countries. The 11 edition of the exercise was held in Pithoragarh area of Uttarakhand in March 2017.