The Mettur Dam is oldest dam India which is located across the river Cauvery in the place of Mettur in Salem District of Tamil Nadu, India. The dam had a long history from the year 1834 to the year 1934.The construction work of the Mettur dam was commenced in the year 1925 and the entire work was completed and opened for irrigation by the Governor of Madras, Sir George Stanley on 1934.The Mettur Dam is also one of the largest dams in the and having a total length of 1700 meters long. It irrigates 1,310 km2 (510 sq mi) of land each year. Its installed capacity for hydro-power generation is 32 MW. The maximum level of the dam is 120 ft (37 m) and the maximum capacity is 93.4 tmc ft. 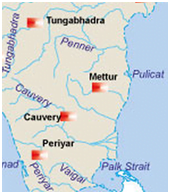 Background of the Dispute

The Mettur Dam is frequently in news during the recent past because of the Cauvery water dispute between the States of Tamil Nadu and Karnataka. Consequent to building dams, including the Kabini Dam, across the Kaveri River in Karnataka, the Mettur Dam does not receive adequate water during lean seasons. Thus, the Dam nearly goes dry during certain parts of the year, when water is most needed by the farmers and general public of Karnataka and Tamil Nadu. This has created serious dispute and tension between the neighbouring States of Tamil Nadu and Karnataka.

On Sep 24, 2012, Tamil Nadu Chief Minister directed the officials to immediately file a petition in the Supreme Court seeking a direction to Karnataka to release Tamil Nadu its due share of water. On Sep 28, 2012, the Supreme Court slammed the Karnataka government for failing to comply with the directive of the CRA. Left with no other option, Karnataka started releasing water. This lead to wide protests and violence in Karnataka.