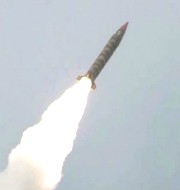 Pakistan has successfully test-fired a nuclear-capable surface-to-surface ballistic missile on March 26, 2021. Missile has a range of 900 kilometres.

Pakistan test-fired Shaheen-1A surface to surface ballistic missile with the aim of re-validating various design and technical parameters of weapon system including the advanced navigation system. According to Army’s media wing, missile has a range of 900 kilometres. Missile comprise of a sophisticated and advanced guidance system which makes it a highly accurate missile system. Launch of the missile was witnessed by senior officials from Strategic Plans Division, scientists & engineers of strategic organisations and strategic forces.

Pakistan had successfully test-fired a nuclear-capable surface-to-surface ballistic missile in February 2021 which can strike targets up to 290 kilometres. Launch of Ghaznavi missile was “culmination of Annual Field Training Exercise of Army Strategic Forces Command”.

It is a land-based supersonic and short-to-medium range surface-to-surface guided ballistic missile of Pakistan. It was jointly designed and developed by joint venture of NESCOM and National Defence Complex (NDC). Missile has been dedicated and named after a species of Falcon inhabitant of mountains of Pakistan. It is also designated Hatf IV. It has an optimal range of 750 km which is propelled by two-stage solid-fuel rocket motor. It can deliver conventional as well as nuclear payload much faster than liquid fuelled missiles like Ghauri. Missile is believed to be very accurate.

This system allows the missile to modify its trajectory, improving accuracy and provides the capability to evade missile defence systems. It is based on terminal guidance system technology. This technology help in improving warhead accuracy by firing small thrusters to adjust trajectory of warheads.  and uses satellite navigation systems to help find the target.