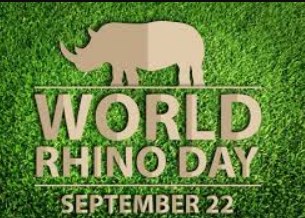 The World Rhino Day is celebrated every year on 22 September to celebrate the world’s five rhinoceros species, and to reflect on the challenges facing them. This special day provides the opportunity for cause-related organizations, Non-Governmental Organisation (NGO), zoos, and public to celebrate rhinos in their own unique ways.

The World Wildlife Fund-South Africa in 2010, announced to celebrate World Rhino Day on 22 September every year since then. The annual event took off on a global scale both on online and offline platforms when Lisa Jane Campbell of Chishakwe Ranch in Zimbabwe and founder of Annamitici joined hands with creative director Rhishja Cota in 2011 to create a massive awareness to protect all 5 species of rhinos from extinction.

The activities on occasion of Rhino Day vary from one participant to another with activities such as peaceful demonstrations, classroom projects, fundraising dinners, auctions and poster displays are observed globally. The Donors and partners for the cause are able to contribute to organizations and initiatives of their choosing.