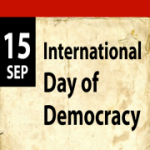 International Day of Democracy is observed every year on September 15 across the world to strengthen democracies and highlight their importance.

The International Day of Democracy is celebrated to uphold and honor the democratic values at the international level. Democracy is a form of government in which the government is directly elected by the people. This day gives the opportunity to review the state of democracy across the world. It aims to achieve ideal democracy, which can be realized only when everyone from everywhere are benefited from democracy. This can be achieved only through full participation of people and support from international community, national governing bodies, civil societies and individuals.

Key findings of the Democracy Index 2021