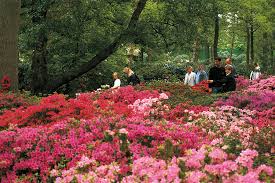 Foundation stone of Rhodendron Park was laid in Tawang district of Arunachal Pradesh by Chief Minister Pema Khandu. Tawang district was once home to about 100 species of rhododendron but now they have been reduced to only 50 plus species due to construction activities in border areas.

The park will be built in total area of 1.15 hectares. It will be partly funded under border area development programme (BADP). More than 30 species of rhododendrons would be planted and conserved in park where terrace cutting to raise the beauty and scenic component.
The park will also have modern nursery, information center on rhododendron, resting sheds, public toilet facility, vehicle parking facility, signage and lightings and iron security gate. It will add to the scenic enhancement of city and also offer an opportunity for conservation of rhodo species, which are under serious threat due to various ongoing road and land acquisition projects.

Rhododendron is a genus of 1,024 species of woody plants in heath family (Ericaceae). It is either evergreen or deciduous. Most species of Rhododendron have brightly coloured flowers which bloom from late winter through to early summer. It is also found mainly in Asia and also widespread throughout highlands of Appalachian Mountains of North America. It is the national flower of Nepal.