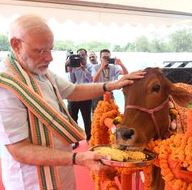 Foot-and-mouth disease (FMD) is a severe, highly contagious viral disease of cattle and swine. The disease is caused by about seven types of viruses and each produces the same symptoms and it is  distinguishable only in the laboratory.

Brucellosis Disease is a bacterial disease which can infect both humans and animals. The disease often spreads when people eat contaminated food such as raw meat and unpasteurized milk. The bacteria also be spreads through the air or contact with an open wound.