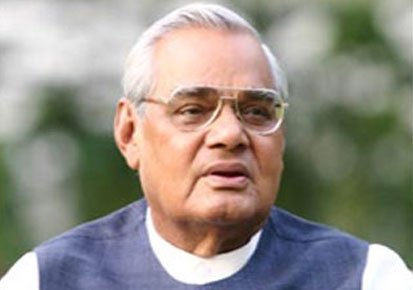 Veteran political leader, prolific writer and former Prime Minister of India Atal Bihari Vajpayee passed away in New Delhi. He was 93. He was Prime Minister thrice in 1996 (13 days), 1998-1999 and 1999-2004 (making him first non-Congress leader to have completed full term as Prime Minister).

He was born on 25th December 1924 in Gwalior, Madhya Pradesh. He was amongst founder members of erstwhile Bharatiya Jana Sangh (and was its president in 1968 upon death of Deendayal Upadhyaya) which later became known as Bharatiya Janata Party (BJP).
He parliamentarian for over  47 years elected to Lok Sabha for 10 times (elected for first time  in 1957 from Balrampur constituency in Uttar Pradesh) and 2 times to Rajya Sabha. During first non-Congress Government of Prime Minister Morarji Desai in Centre he had served as Minister of External Affairs.
He served as PM of India between 1996 and 2004 in three non-consecutive terms viz. May 1996 (for 13 days), 1998–1999 (for 11 months) and 1999–2004. During his second term as PM, he had ordered thermonuclear tests in May 1998 which were seen as strategic masterstroke to blunt Pakistan’s nuclear ambitions.
Some of his pet projects launched during his tenure as PM were National Highway Development Project (Golden Quadrilateral) and Pradhan Mantri Gram Sadak Yojana, Sarva Shiksha Abhiyan. In 2009, he had retired from active politics due to health concerns.

He was awarded the India’s highest civilian honour ‘Bharat Ratna’ in 2015. His birthday is celebrated as Good Governance Day (GGD) by the Central Government since 2014 to foster awareness among the people of accountability in government. His poetry collection is released in his book Meri Ekyaavan Kavitayein (My 51 Poems).