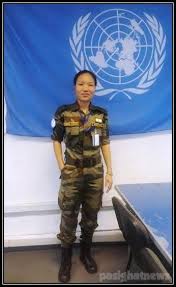 Ponung Doming is the first lady officer from Arunachal Pradesh in the Indian army to be elevated to the rank of Lieutenant colonel.

She was commissioned into the Indian army as Lieutenant in 2008. She is currently posted in Pune, Maharashtra. Doming had completed her graduation in civil engineering. She served the UN Peace keeping force in Congo in 2014.

Women in armed forces were recruited only in the officer’s rank till 2018. The Indian army for the first time issued notification in 2019 inviting female applicants for the position of Soldier General Duty, personnel below officer rank. There are around 3.8% of women officers in the army. Navy has 6% of women officers and air force has 13% of women officers.

In India, females are not allowed to serve in combat units like armored corps, infantry and Mechanised infantry. The role of women in Indian army began in 1888 when the British Raj began Indian Military Nursing Service. It was only in 1992, the Indian army began inducting women in non – medical roles. Later in 2007, the UN first all female peace keeping force was deployed to Liberia by India. This was first of its kind not only in India but through out the world!