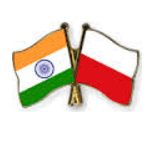 Poland has assured its support for India’s bid for membership in the elite Nuclear Suppliers Group (NSG) and a permanent seat in the expanded UN Security Council. This was stated during the visit of vice President Hamid Ansari to the Poland.
Apart from discussing various bilateral and multilateral issues, the two countries also signed an agreement in the agriculture sector.  It was also agreed upon that there exists scope to increase cooperation in railway, defence, mining, agriculture, civil aviation, as well as in areas like food processing, solar energy, clean coal, treatment of solid waste.
Poland is a member of the Nuclear Suppliers Group (NSG).

Nuclear Suppliers Group (NSG) is a group of 48 nuclear supplier countries that seeks to contribute to the non-proliferation of nuclear weapons through the implementation of two sets of Guidelines for nuclear exports and nuclear-related exports. Presently India is not a member of the group.

Also, the countries acknowledged the need for early adoption of the Comprehensive Convention on International Terrorism at the UN.

The Comprehensive Convention on International Terrorism is a proposed treaty which intends to criminalize all forms of international terrorism and deny terrorists, their financiers and supporters access to funds, arms, and safe havens.

India and Poland established diplomatic relations in 1954. The two countries share common ideology like opposition to colonialism, imperialism, and racism.
Poland is India’s largest trade partner and export destination in the east European region. Investments made by India in Poland are around USD 3 billion and Polish investments in India are around 600 million USD. India’s major exports to Poland include tobacco, processed minerals, chemicals, rubber, plastic, machinery, drugs, transport equipment, and ready-made cotton garments etc.
Poland hosts around 3,000 members of the Indian community who are mostly traders who settled in Poland after the collapse of communism.