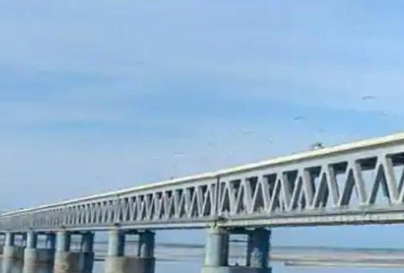 PM Modi inaugurated the Bogibeel Bridge on the birth anniversary of the late Atal Bihari Vajpayee i.e. December 25 which is observed as “Good Governance Day”. This 4.9 km-long bridge is the nation’s only fully welded bridge and for the first time European codes and welding standards were adhered to and it has a life of about 120 years.
The Bogibeel Bridge connects the southern bank of the Brahmaputra River in Assam’s Dibrugarh district with Silapathar in Dhemaji district, bordering Arunachal Pradesh. This Double-Track and three-lane Road Bridge will be the lifeline of the north-eastern part of India
The railroad bridge is constructed at a cost of Rs 5,900 crore and it is Asia’s second-longest railroad bridge. The bridge is part of infrastructure projects planned to improve logistics along the border in Arunachal Pradesh which includes the construction of a trans-Arunachal highway on the Brahmaputra’s north bank, and new road and rail links over the river and its major tributaries.

Benefits of the Bridge

The bridge is referred to as “Lifeline of Assam”, It is an asset for the entire north-eastern region. The benefits of the bridge include: