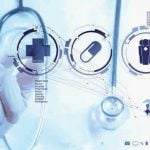 The AB-PMJAY was launched on September 23, 2018, to minimize the financial burdens caused by medical expenditures. It provides cashless hospitalized coverage with features like no cap on age or family size, no restrictions on pre-existing health conditions, coverage for pre and post-hospitalization medical expenses, and coverage for over 1,500 treatment packages like cancer care and organ transplant. It does not cover OPD services, preventive medical check-ups, and stand-alone diagnostic services. The scheme is being implemented by the National Health Authority (NHA) at the national level.