Paika rebellion to be named as 1st War of Independence: Government 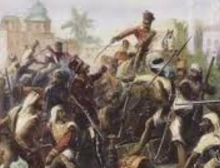 The Union Human Resource Development Minister Prakash Javadekar has announced that Paika rebellion (Paika Bidroha) of 1817 will be named as First War of Independence against British Rule in history books from next academic session. Earlier, 1857 Sepoy Mutiny was regarded as the First War of Indian Independence, but Paika Bidroha predates it.

Paiks were traditional landed militia under Gajapati rulers of Odisha. They used to perform policing functions and owned rent-free land that was given to them for their military service to Kingdom of Khurda. However they were forcefully usurped their land rendering them landless by the policies of British East India Company. They were also subjected to repressive land revenue policies and humiliation by the British.
At that critical juncture, Bakshi Jagabandhu Bidyadhar, the military chief of King of Khurda led army of Paikas forcing the East India Company (British) forces to retreat in 1817. During the rebellion, Paikas had attacked British symbols of power, setting ablaze policestations, administrative offices and treasury during their march towards Khurda, from where British fled. They were supported by local rajas of Kujang, Kanika, Nayagarh and Ghumusar and zamindars, village heads and ordinary peasants.
The British were initially taken aback and then tried to regain lost ground from the rebelling Paikas. Many a battle ensued with some victories to the rebel Paiks but the British finally managed to defeat them within three months. Widespread suppression followed with killing and imprisonment of many Paiks.
Some Paik rebels fought a guerilla war till 1819 but were captured and killed. Baxi Jagabandhu was finally arrested in 1825 and died in captivity in 1829. At present, Paika Bidroha enjoys a cult status in Odisha but unfortunately it has received less attention at the national level.