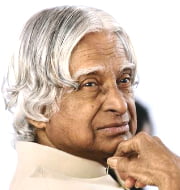 World Students’ Day is observed on 15th October each year.

World Students Day is observed to honour the achievements of the former Indian President APJ Abdul Kalam, who made major contributions in the field of education and inspired students. This day also reiterates the importance of education and recognizes the Fundamental Right to Education. Dr Kalam passed away due to cardiac arrest while delivering a lecture at IIM-Shillong in 2015. During his lifetime, he was received Bharat Ratna – the highest civilian honour conferred by the Indian Government. He also received Padma Bhushan and the Padma Vibhushan in recognition for his contributions as scientific advisor of the Indian Government. He worked as a scientist and science administrator in Indian Space Research Organization (ISRO) and the Defence Research and Development Organization (DRDO). Due to his key contributions in India’s civilian space programme and missile development, he is known as the Missile Man of India. He also played a major role in the development of nuclear power in India. He was the first president in India to send back a bill to the parliament for reconsideration.

What is International Students Day?

World Students Day is different from international Students Day. The International Students Day is observed on November 17 to recognize multiculturalism of students, especially those studying in foreign countries, away from their homeland. It commemorates the day when Czech universities were raided by the Nazis in 1939. It honours students who lost their lives or sent to concentration camps. Over the years, this day evolved as a celebration of diversity among students.