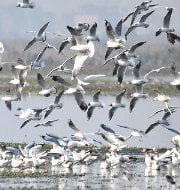 The World Migratory Day is an awareness raising campaign that highlights the protection and conservation required for migratory birds. It was begun in 2018.

The campaign is organised by two international wildlife treaties administered by the United Nations Environment Programme. They are as follows

The idea of celebrating World Migratory Day was designed by the US Fish and Wildlife Service in 1993.

The COP 13 Boss held in India. It is proposed to include 10 new species under the convention on conservation of migratory species. It included three Indian species namely Asian elephant, Great Indian Bustard and the Bengal florican.

According to the World Wildlife Fund the increase in consumption of food and resources have led to Natural Habitat loss. This is also accompanied by developmental activities such as Dam it has led to decline in animal population. The World Wildlife Fund has named this as Sixth mass extinction. According to living planet index, the earth will take around 5 to 7 million years to recover. Between 1970 and 2014 60 percentage of animal and bird population have been wiped out. Wetlands are the hot breeding spots of migratory birds. With the increase in infrastructural and developmental activities the wetlands are disappearing fast. This in turn is affecting population of migratory birds to large extent.