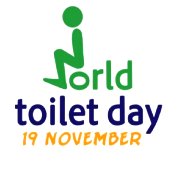 The World Toilet Day is observed every year across the world on 19 November to raise awareness and inspire action to tackle the global sanitation crisis.
Significance of Day: It seeks to draw attention of people around the world to raise global awareness of the daily struggle for proper sanitation which in fact is a human right along with clean water.
2016 Theme: “Toilets and jobs”. It focuses on how sanitation or the lack of it, can impact on livelihoods. It also highlights the importance of crucial role played by Toilets in creating a strong economy, as well as improving health and protecting people’s safety and dignity, particularly women’s and girls’.
The observance of this day is coordinated by United Nations-Water in collaboration with Governments of member countries and relevant stakeholders.
India related Facts
In India, the observance of the day highlights the importance of Swacch Bharat Mission which to make India clean and open defecation free (ODF) by 2019. So far under Swacch Bharat Mission-Gramin 2.7 crore toilets are built, 1.2 lakhs villages are declared ODF, 60 districts declared ODF, 3 states (Sikkim, Himachal Pradesh and Kerala) are declared ODF.

WTD was instituted by World Toilet Organisation in 2001. United Nations General Assembly (UNGA) had given it official recognition in July 2013 in its 67th session under the global campaign of Sanitation for All resolution. Observance of this day now has become an important platform to demand action from governments. It seeks brings together different groups, such as media, the private sector, development organisations and civil society in a global movement to advocate for safe toilets.