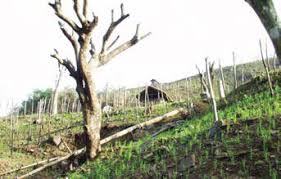 NITI Aayog in its recently report has recommended that Ministry of Agriculture to take up mission on shifting cultivation to ensure inter-ministerial convergence between different ministries. The report was titled “Mission on Shifting Cultivation: Towards a Transformational Approach”.

Central, State government departments of forests and environment, agriculture and allied departments have divergent approaches towards shifting cultivation. This creates confusion among grass-roots level workers and jhum farmer.
It calls for policy coherence and recognising land for shifting cultivation as agricultural land where farmers practise agro-forestry for production of food rather than as forestland. It also suggests that shifting cultivation fallows must be legally perceived and categorised as ‘regenerating fallows’ and credit facilities be extended to those who practise shifting cultivation.
It also addresses issue of food and nutritional security of communities involved in jhum cultivation during transition and transformation by broadening public distribution system (PDS) to ensure widespread access to cereals and other basic food items. It also noted that between 2000 and 2010, land under shifting cultivation dropped by 70 %.

It is traditional agricultural practice that involves clearing vegetative forest cover on land and slopes of hills, drying and burning it before onset of monsoon and cropping on it thereafter. After harvest, this land is left fallow and vegetative regeneration is allowed on it till the plot becomes reusable for same purpose in cycle.
In north east India, it is called as jhum cultivation. People involved in such cultivation are called Jhumia. Shifting cultivation is considered as important mainstay of food production for considerable population in northeast India in states like Arunachal Pradesh, Nagaland, Mizoram, Meghalaya, Tripura and Manipur.
Shifting cultivation causes in long term causes problem of land degradation and threat to ecology of the region at large. Burning of forests provide temporary nutrients like potash to soil. Burning of forests results in emissions of greenhouse gases (GHGs) such as CO2, NO2. It also increases surface run off of rainwater leading to soil erosion.