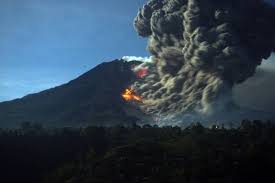 The most active volcano of Indonesia, Mt Merapi, recently erupted with a river of lava and searing gas clouds. The lave and clouds flown for 1,600 meters down its slopes.

Indonesia, the archipelago of 270 million people, is situated in the Southeast Asia and Oceania between the Indian and Pacific oceans. It comprises of more than seventeen thousand islands, including Java, Sumatra, Java, Sulawesi, parts of Borneo (Kalimantan) and New Guinea (Papua). It is considered as the world’s largest island country and the 14th-largest country with respect to area. The country is also the 4th-most populous country in the world. It is also the most populous Muslim-majority country. The most populous island of Indonesia is Java which is also the most populous island in the world. The country is prone to earthquakes and volcanic activity as it sits along the “Pacific Ring of Fire”.

The region sits around rim of the Pacific Ocean which is prone to volcanic eruptions and earthquakes. It is a horseshoe-shaped belt which is about 40,000 km in length. It includes the Pacific coasts of South America, North America and Kamchatka apart from the western Pacific Ocean areas.