Manoj Sinha is the new L-G of Jammu &Kashmir 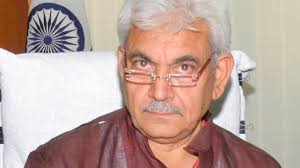 Former Union Minister and BJP Leader Manoj Sinha has been appointed as the new Lt. Governor of Jammu and Kashmir. The President of India has approved the resignation of the former LG Girish Chandra Murmu and has made the decision to appoint Mr Sinha.

Who is Manoj Sinha?

Sinha was born on July 1, 1959, in Eastern Uttar Pradesh and he has been involved in working for the backward villages of the state. He started his political career as the President of Banaras Hindu University Students’ Union in 1982. After that, he was elected to the Lok Sabha in 1996 for the first time and repeated that feat in 1999 as well. He has also remained a member of the BJP National Council from 1989 to 1996. Sinha was elected to the Lok Sabha in 2014 as well. He managed the portfolio of Railways in the NDA government formed in 2014.

J&K was made into a separate UT in 2019 along with Ladakh. Girish C Murmu was chosen as the first LG of the UT and suddenly he resigned from the post yesterday. It is being thought that he might be taking over the post of the CAG to fall vacant this week. Murmu, an IAS Officer of Gujarat Cadre, worked with Narendra Modi when he had become the Prime Minister. Also, the comments made by the former LG are thought not to have taken very cordially by the government.